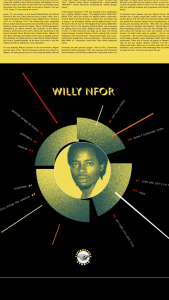 It is apt that our next release is Willy Nfor’s Movements is our 7th release. Willy is little-known master bass player who left his country for Nigeria at 20, formed the Mighty Flames with made a name for himself as a session player played with Bongos’ The Groovies, William Onyeabor (Crashes in Love), Odion Iruoje at Phonodisk where he played on several releases, left for Paris, became a sought-after session player, formed Ghetto Blaster (with Fela Kuti’s Egypt 80 alumni), joined Mory Kanté’s band toured the world on the back of the Global Hit record, Yé Ké Yé Ké. Unfortunately, he died prematurely of a cancer in 1998 before the world could really know him.

This compilation (from three rare Nigeria-produced LPs; Mighty Flames’ Willie Nfor, Feel So Fine, My Turn, two of which have never been sold on Discogs) capture Willy’s vision of a free world where love, music and breaks migrate freely. His afro-boogie nods to Bootsy Collins and Louis Johnson (The Brothers Johnson) but it invariably afro and inalienably Willy’s music, a space funk with deeply rooted rhythmic grooves that has made these LPs highly sought-after by music aficionados and selectors worldwide.

So it is with great pleasure that I present this vinyl-only release to you. Tentative Release Date, 7th Dec 2018 (TBC). 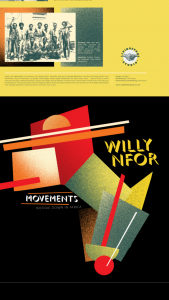 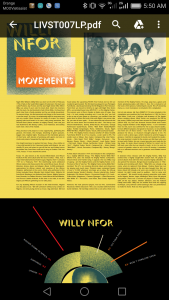 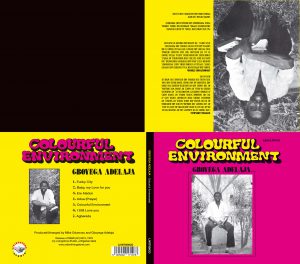 So many reasons to give thanks to the Creator for an amazing 2017. 2018 is prepping up to be an even more impressive year.

I will let you know as we get into things. 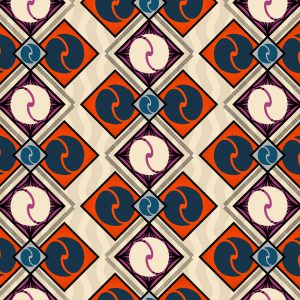 This one is super special. An amazing insight into the catalogue of a Lagos-based label in the early 80s, when good taste was still de rigueur and 70s keyboards and synths were still in active service. Its a mix of pop-disco, deep funk, and dreamy disco-highlife. The operative term is disco… Not, ABBA or Boney M, the tough and rugged, cosmic afro version.

The miracle is that Advice (Christy Ogbah), Bindiga, Mike Umoh, Johnny O’Bazz were all on one label. The selection of songs are plucked from albums that are routinely exchanged for big money.

This one is for the people. Enjoy! 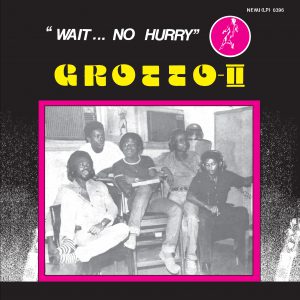 We are elated to announce our first release post-Strut, Grotto’s second album, Wait, No Hurry… Its a mature afro-funk classic of the rarest calibre (I don’t own a copy, I had to get one from Uchenna Ikonne to create a master copy)..

This amazing album was made by some of the best musicians on the 70s Lagos live circuit.

Toma Mason Jnr had evolved into a very capable and interesting bass player, highly sought after and rated. The rest of the band had a developed a chemistry from playing live on a steady basis. This can be heard clearly on the funk classics like Wait… No Hurry, Who Gives A Damn, Bad City Girl and Freestyle.

Its a very balanced album which provides a great listening experience. Enjoy!

We’ve decided to end our Production and Distribution deal with Strut/K7. After three albums, Friday Night by Livy Ekemezie (ODLIV 001), At Last by Grotto (ODLIV002), and Mind Twister by The Apples (ODLIV003).

We will be working directly with distributors, Rush Hour (Europe and UK), Forced Exposure (USA and North America) and Disk Union (Japan).

For anybody wanting to start a label, one word of advice, do it yourself….

Here is the pre-order link for the following release: