“Grotto started in ‘Gregs’ (St. Gregory’s College in Ikoyi, Lagos) around 1973/1974. The original line-up was myself on lead guitar and bass guitar, Martin Amenechi also played both lead guitar and bass and Jimi ‘Skid’ Ikemefuna was on drums. Over the years, the group went through several other members. The members of Ofege were also students in the same school and I also played lead guitar for them. We were all in our teens.

As Grotto, we played a rock/funk fusion. We were probably aged 15, 16 or thereabouts and we were heavily into music; we listened to Jimi Hendrix, Carlos Santana and lots of rock bands like Deep Purple, Black Sabbath, Pink Floyd and Led Zeppelin. We listened to a lot of rock to learn guitar solos. As I grew older I think I got a bit jazzier, though. I also listened to Curtis Mayfield, James Brown, Isley Brothers, Prince and a lot of funk groups from that era. 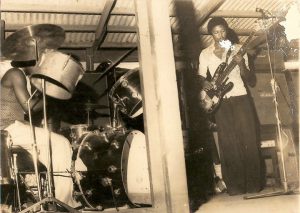 Odion Iruoje was the A&R manager at EMI at the time and he auditioned us, liked the material and signed us. He also produced our recordings. As a band, we were also very much involved in the production but, being kids then, I’m not sure that we were credited for that on the album.

It was a cool period musically – you could play in several bands based on relationships. A lot of guys moved around. Martin Amenechi, Femi Lasode and Etim Bassey played in a band called War Head Constriction before Grotto but they were also members of Grotto at different points in time.

Most of us were boarders and the school encouraged music and had instruments so we had time to jam and really gel together. Only Martin was a day student. We used to break bounds to go to the studio when we started. The group still continued after we left Gregs. We had to juggle A-Levels with gigs and I completed my studies. We used to skip school whenever we had a show, rehearsal or a recording date. Grotto was a very active live band unlike Ofege, which was mainly a studio band.

My old man was totally against me being involved in music, which is why my picture didn’t appear on the first Ofege album I played on. I was afraid he would spot me and ‘kill’ me! Even the pictures of Grotto were only featured on the back cover of the album, if my memory serves me right. 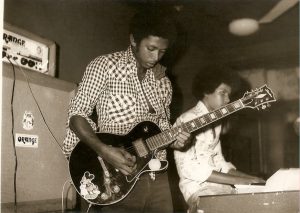 Apart from our recordings with Odion and EMI, we also started a couple of later projects which remained uncompleted. I think we recorded at Arc Studios (Ginger Baker’s studio in Nigeria) and some other studio I’ve forgotten the name of. Arc Studios was a 16-track studio back then while EMI was just an 8-track studio. So we preferred Arc.

We played at The Shrine with Fela, with Tee Mac, I think, at Batakoto, Blackman Akeeb Kareem at some club in Surulere, with Sonny Okosun at Kakadu, Segun Bucknor at Granada Hotel and lots of other places and with other musicians I don’t recall any more. We also played at UNILAG, the Lagos State Uni… We played a lot. The gigs were not paid as the organisers felt that they were doing us a favour. We all came from relatively comfortable backgrounds so money wasn’t the first consideration. It was like a very serious hobby for us and, besides, not many musicians made much money back then anyway.

We mixed very well in school and had lots of friends. There were lots of female admirers as well since we played some shows as part of our school activities and also played in some girls’ schools like Holy Child, Queens College and one gig at St. Agnes Yaba. The Grotto songs I really liked were ‘Come Along With Me’, ‘Bad City Girl’ and ‘Funk From Mother’. The songs were quite advanced because we were well travelled and well read. We were young but quite mature for our age. 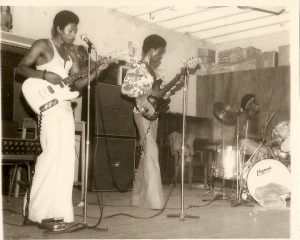 I always travelled out for the holidays so I was able to buy original instruments. I looked up to established cats like Berkeley Jones (from Blo) but I would say that the best guitar players then were people like Tony Isikalu, Martin Amenechi, Erasmus Yurenki and, of course, my humble self.”

“I remember the Grotto audition, they were a bit cocky, St Gregs boys, they had some material that they thought was great, but I felt otherwise. Grotto was a rock group but we needed to get them somewhere original. That was the challenge, not to sound like Ofege or some British rock group, but for them to sound like their authentic self. I was into youth bands at the time, I felt they offered something fresh, most pros were into reggae which I hated (not as a genre but the aping of it).. youth bands allowed me to experiment, I gave them something and they in turn gave me something, which I could take to the next project. They made me in a way. EMI (Nigeria) did not really get the emergence of the youth market, they thought I was fooling around with kids”. 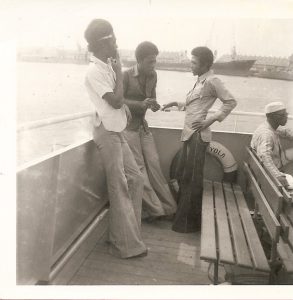