Odion Livingstone was set up in 2016 by Mr Odion Iruoje, ex-resident producer at EMI records and Temi Kogbe, a collector of vintage African recordings. We are based in Lagos, and have relationships with musicians, producers and record executives from the 1960s to the 80s. We see our efforts as an attempt to share our love for music.

We hope to revist our musical heritage (especially all forms of dance music; afrobeat, funk, disco and highlife) to unearth music that was previously unknown, or impossible/hard to find.

We are also interested in releasing contemporary music to the international vinyl market. 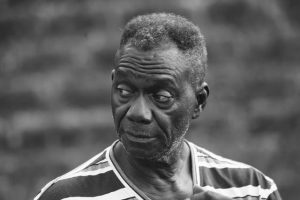 Mr Iruoje is widely recognised as the foremost Nigerian producer of the 70s and early 80s. He pioneered several professional practices into the process of making a record. He also introduced many innovations into different genres of indigenous music.

His sound, which he forged in the seventies, has become highly sought after by collectors around the world and the original copies of his productions are exchanged for hefty sums.